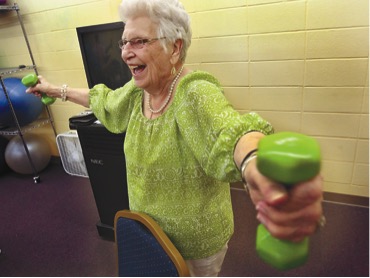 A common belief among elderly people is that they are too old for certain things, or that it is too late. Older people often say that they are too old to learn something new, or too sick to be physically active. However, that is rarely the case, especially when it comes to taking care of ourselves. Health is something we must remain vigilant about, as there are many things people of all ages can do to help themselves, especially after facing health issues.

We often report new findings that support the importance of having physical rehabilitation after having surgery or experiencing a different health episode. Physical therapy and rehabilitation directly impact health outcomes after hospital discharge, but this is also an important lesson for just about everyone.

Exercise can benefit anyone and the same goes for older adults. It is unlikely that you will be making free throws on the basketball court, but even mild physical activity is still important. Being fit directly relates to a person’s ability to age in their homes and remain independent for longer. This is the secret to feeling like you’re 65 when you’re 85, but it’s important to start early.

It’s true that Americans are living longer than ever. In the next decade, more than 89 million people will be 65-years-old or older. This is going to be more than double the number of older people in the U.S. in 2011. Fitness can also lead to a longer life, but it’s really more about quality than quantity. It is important to be healthy in order to be able to enjoy these additional years.

Regular exercise and stretching can reduce risk of falls and broken bones, and it helps people bounce back from medical issues. Older people that have suffered triple bypasses and cancer have found salvation in physical therapy after a health episode, and many continue their commitment to being physically active from there. After all, it does improve your well being mentally, emotionally, as well as physically.

So what qualifies as low intensity exercise? Brisk walking or jogging, for those that are able to jog, and dancing are great aerobic exercises that are generally safe for seniors. Yoga will help keep you limber and flexible and there are many yoga classes designed especially for older people their unique needs. Balance exercise like tai chi can help you prevent falls and remain mentally alert for longer periods.