Reducing preventable readmissions in Chicago has a strong ally on its side. Dr. Marilyn Szekendi, PhD, RN, published a report last year in the Journal of Hospital Medicine that claims that hospitals need to make only one key step to reduce preventable rehospitalizations, and it required identifying common traits across all, or most, patients.

Dr. Szekendi is the director of quality research at University Health System Consortium in Chicago, otherwise called UHC. She says that observing that different traits and characteristics that are shared among those that frequently admitted to the hospital can pave the road to finding a solution to unnecessary rehospitalizations in Chicago, and beyond. Frequent hospital admissions are defined as being admitted to the hospital more than five times in a given year.

For the study, UHC worked with an alliance of affiliate hospitals and nonprofit medical centers to conduct the study. The group studied more than 28,000 patients who were admitted from 2011 to 2012 for a combined 180,185 times to academic medical centers, like the ones at the University of Chicago and University of Illinois Chicago (UIC), but this study included similar institutions from across the country. Although the patients in the study made up only 1.6 percent of all patients, they comprised more than 8 percent of all admission and 7 percent of direct costs.

The study provides hope of solving preventable rehospitalizations because the scientists and doctors who wrote this report believe that this type of analysis can easily be conducted in any medical institution.

The study also revealed the common factors that are linked to frequent readmissions. Patients with comorbidities are readmitted an average of 7.1 times versus 2.5 in a control, and 84 percent of those admissions are for medical services. They also found that patients who have Medicaid or are completely uninsured are also more likely to be readmitted to the hospital, 27.6 percent versus 21.6 percent of those who have private insurance.

Dr. Szekendi wants to expand this study to observe other factors that they were previously unable to collect data for, and she believes that that will reveal even more solutions to preventable rehospitalization. These factors include housing status, preexisting access to medical care, and other key lifestyle indicators.

Although there is still a while to go before the collected data can paint a picture clear enough to indicate proper course of action, but we do have the tools to reduce unnecessary readmissions. Extending post-hospitalization treatment and rehabilitation at a short-term nursing facility has been proven to dramatically reduce rehospitalization and set the patient up for successful rehabilitation, to get back to regular life quicker and safer. 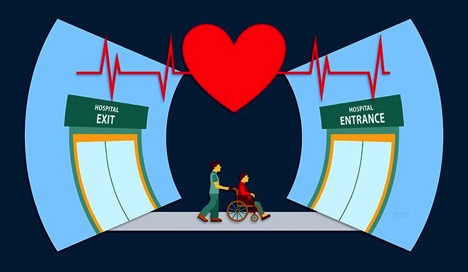 One of the biggest issues facing the wellbeing of the elderly community is avoidable hospital readmission. Medicare has reported that nearly 70 percent of its patients were readmitted to the hospital within 30 days of have surgery. Hospital readmissions can be caused for a variety of reasons, but ultimately reflects on the hospital. The 30-day measure reflects how well a hospital and the medical team educated patients on their conditions, treatments, complications, and effective transition of care during discharge. This means, did the patient receive transitional care (like a skilled nursing facility), and how well were instructions transferred?

The Hospital Readmissions Reduction Program under the Affordable Care Act focuses on readmission rates at a hospital for specific conditions. Hospitals that have above average readmission rates will be charged a fine against their Medicare earnings. A few years ago, more than 60 percent of hospitals incurred some penalty (the average cost around $125,000), and nearly 10 percent incurred a maximum fine. Last year, 2,610 hospitals were fined for excessive readmissions.

Unnecessary hospital readmissions are also dangerous for the patient. Excessive rehospitalization weakens the immune system and the body overall, stressing the entire system. There is also a heightened risk of overmedication, infection, or death.

Of course, there are medically necessary and unavoidable hospital readmissions. A person’s health can falter a few weeks after an intensive treatment or procedure, infections can grow, and other unforeseeable issues can arise. The best way to minimize risk of either is to have adequate transfer care after being discharged from the hospital. Skilled nursing facilities can help ensure that the best care is provided without interruption, from the hospital bed, to your home bed.